For 2016, Spectrum completely overhauled their Raku Glaze Line. Colors that had problems with going thick and crystallizing in the jar have been reformulated to eliminate those problems. 5 unpopular colors have been discontinued, but 10 exciting new colors have been added. 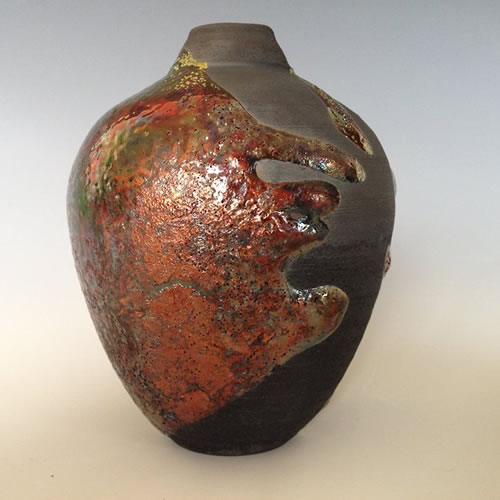 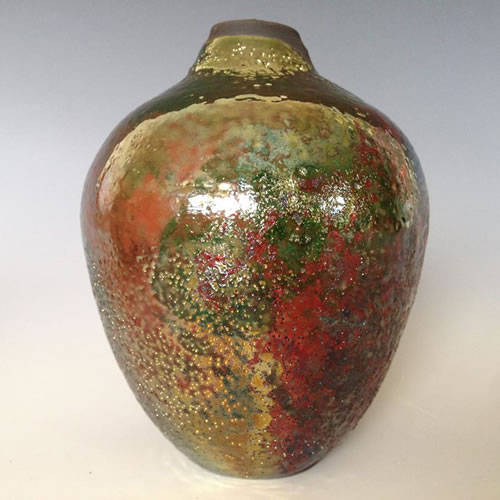 Due to the many variables involved in Raku firing, particularly during the reduction phase, chip charts and printed color charts should be used only as approximate guidelines. Your results may vary greatly due to different firing conditions.

RAKU FIRING: Spectrum raku glazes can be fired anywhere from 1600°F up to cone 06 (1850°F) in either an electric or gas kiln. We recommend firing 850 to 856 and 868 to 879 to a peak of 1700 - 1750°F and 860 to 866 to a peak of 1600 - 1650°F. They should be allowed to cool in the kiln to 1600°F. Different combinations of peak temp and reduction starting temp will produce different results. While still red hot they should be transferred as quickly as possible into a reduction bin (typically a lidded metal garbage can or small metal container that has been lined with organic material, such as newspaper and/or sawdust, etc.). As soon as the pieces are in the bin the lid should be put on to keep oxygen from entering the container, in order to develop the reduction atmosphere. The pieces should be allowed to cool in the bin for at least 20 minutes.

WARNING: When red hot pieces go into the bin, the organic material ignites and will produce flames and smoke. This part of the firing, particularly the opening of the reduction bin, should be done outside. Always take safety precautions when firing raku such as the use of high temperature gloves, protective eyewear, and a respirator. Always have a fire extinguisher handy.