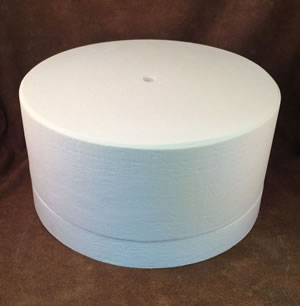 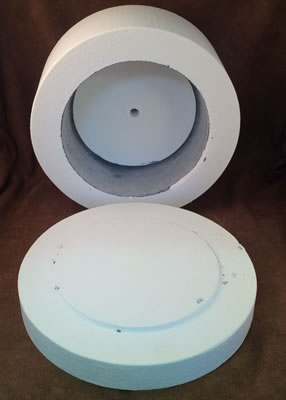 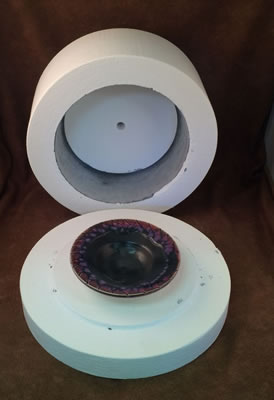 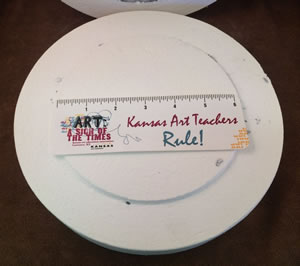 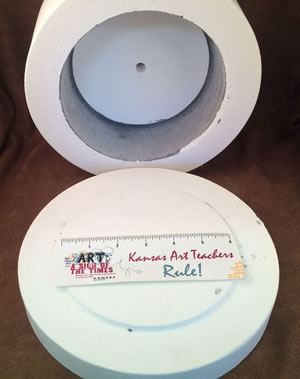 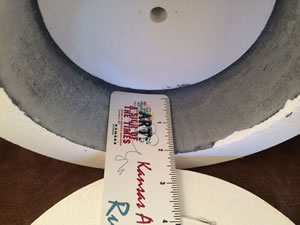 The MicroKiln you have purchased is a container kiln consisting of two parts - a base and a cover (hood). Both parts are made primarily of a very light-weight, white insulating fiber with a black compound lining the inside wall of the cover. The black material absorbs the microwave radiation and heats up to approximately 1650°F (900°C), thereby heating the chamber to this temperature very quickly.

The wattage of the microwave oven has a direct bearing on the firing time. The firing time is also directly related to the size, or weight, of the article to be fired and the size of the MicroKiln being used.

The MicroKiln maximum temperature is approximately 1650°F (900°C). Most glasses will melt at 1400-1500°F (760 – 820°C). A good guideline for judging when glass fusion is starting in the MicroKiln is the appearance of an orange glow at the hole at the top of the cover (hood), which indicates that the inside of the MicroKiln is approaching 1450°F (800°C). The optimum firing time will have to be determined (based on microwave wattage, size of the MicroKiln, size of article(s), and amount of added decoration) by firing test pieces.

Guide lines for firing times are provided on the “Table of Recommended Firing Times”. Over firing (setting the microwave oven running time well beyond the recommended firing times in the table with resultant high temperatures) can damage the MicroKiln.

Although the edges of a MicroKiln generally remain cool, the top of the cover and the bottom of the base are very hot immediately after firing. Placing a hot MicroKiln on a non-heat resistant surface could cause a fire or leave a burn mark on the surface.

Also, the location where you are going to place the hot MicroKiln should have at least 6 inches of clearance from any flammable material, both above it and around it. In particular, make sure that nothing flammable comes close to the hole in the top of the MicroKiln while it is glowing orange.

Always prefire a new MicroKiln. Place it on the microwave turntable and prefire it empty for 3 minutes.

Always wear heat resistant gloves when you take the hot MicroKiln out of the Microwave oven.

Let the MicroKiln cool for 20 minutes after each firing before further use.

Similar to conventional ovens, it takes less time to “cook” an already warm MicroKiln than a cold one.

Any articles that you are going to fire in the MicroKiln must be completely dry before you fire them.

If firing a single article, place it in the center of the kiln base.

If firing more than one piece, place them as evenly balanced as possible.

Do not allow any of the articles or the shelf paper to touch the side wall of the kiln during firing, as this may damage the MicroKiln and impair its proper functioning.

In the unlikely event that you notice sparking, turn off the microwave immediately.

Rinse the base of the fired article after cooling, to remove traces of ceramic paper which is harmful if inhaled. It is recommended that you use a dust mask when working with ceramic shelf paper.

If firing any materials in the MicroKiln that the material suppliers specify are harmful or toxic make sure that the microwave oven is properly vented to prevent exposure to toxic fumes.

Keep a detailed log of firing times and results in order to be able to repeat your results.

After firing a MicroKiln it is recommended that you clean the inside of your microwave oven before cooking food in it.


Firing Time Guidelines below are for a 700 Watt Microwave Oven...reduce times by about 70% for higher wattage. Times do also vary based on the weight/thickness of the piece(s). The thicker/heavier it is, the more time it will need. Upon completion, if the piece does not appear to have gotten hot enough, it is fine to re-fire it, just let it cool completely first.